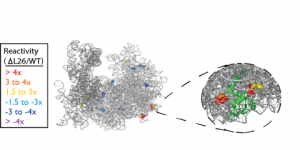 The structure of RNAs is important for all gene expression processes. For example, translation of mRNA into protein can be regulated by RNA base pairing, which acts as an impediment to the ribosome and modulating the availability of miRNA target sites. Despite its importance in gene expression, our knowledge of RNA structures remains sparse. There are three general approaches toward RNA structure determination – biophysical methods, computational approaches, and biochemical probing. Although X-ray crystallography and NMR have been extremely valuable for studying small RNA structure, these biophysical approaches have been much less successful in determining large RNA structures. Indeed it took roughly 30 years, and multiple laboratories to determine the x-ray crystal structure of the ribosome. Computational approaches can predict potential RNA folding patterns, but often result in multiple predictions that can only be differentiated with experimental data. Biochemical probing can be used to add experimental data to RNA structure models. This approach involves treating RNAs with nucleases that specifically digest single or double-stranded regions, or with chemicals that preferentially react with nucleotides in single-stranded regions. The location of chemically modified nucleotides is then traditionally mapped using primer extension. However, these traditional biochemical probing of RNA structure is tedious and time consuming.

The McManus Lab has developed a high-throughput method for structural analysis of long RNA molecules (Mod-seq). We are building on traditional chemical structure probing approaches by using massively parallel sequencing to identify sites of chemical modification. We are also interested in finding ways to discriminate between mutually exclusive base pairing interactions. The information gained from these experimental approaches can then be used to guide better computational models of RNA structure.